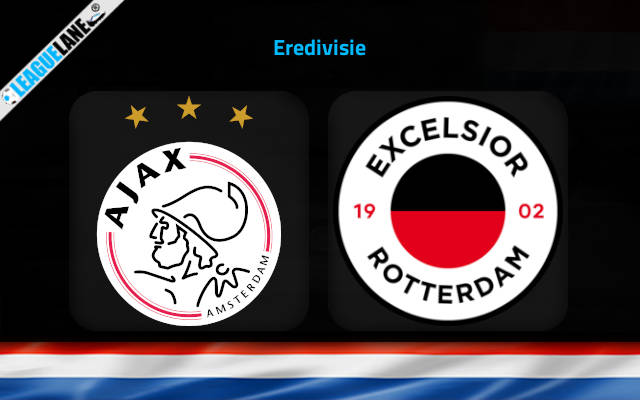 Reigning Netherlands champions Ajax have made a respectable start to the new Eredivisie campaign, the teams’ performance have proved to be a slow burner considering that they are in the second position. An important game awaits as they will face a struggling Excelsior side.

The first on the agenda for Alfred Schreuder’s side will be to improve their home form, as his side are winless since the beginning of this month. In their last league outing, they managed to beat Volendam. Davy Klaassen scored the final goal in that 4-2 thriller.

The month of October has been very productive for the host as they are yet to lose a single game in the Eredivisie. Now, they have a golden chance to claim the top spot as the visitors are going downhill during this campaign.

Following two back-to-back defeats the visitors managed to hold NEC by 1-1 most recently. The team is in the 12th position on the table. Also, more than half of their matches have ended in a defeat.

It is worth knowing that the host are experimenting with their team selection lately. This is one of the reasons why they are struggling in the European competition. The full focus is towards their domestic league this season.

Do also note that, that the visitors are on a three-game winless run. It will be a very difficult task for them to win this fixture.

Our prediction is that Ajax will score over 5.5 goals – at 4.00 odd. This is after considering that the host have scored a minimum of six goals in their last two consecutive encounters against Excelsior.

Our second tip for this game is that Both Teams to Score in the second half – at 3.40 odd. The visitors have scored three goals in their last four matches, out of which all the three were scored after the 60th minute. Also, against Volendam the host scored half of their goals in the second half.