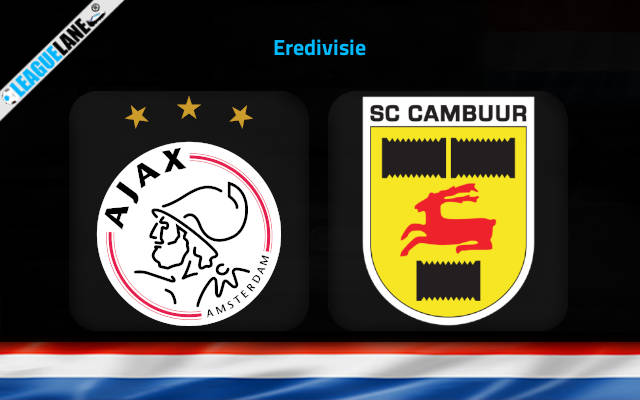 Ajax will have a nice chance to preserve their perfect start to the new Eredivisie campaign on Saturday afternoon when they host Cambuur in the fifth round of the competition.

The team led by Alfred Schreuder managed to secure all four wins from the inaugural four rounds despite showing signs of vulnerability in the preseason, and especially in the Super Cup defeat to PSV Eindhoven.

New manager Schreuder was particularly satisfied with the improvements in his team’0s recent defensive displays.

Ajax kept back-to-back clean sheets in the wins over Sparta Rotterdam and Utrecht in the previous two rounds, both on the road.

They completely controlled the happenings on the pitch in the last weekend’s 0-2 win at Utrecht, allowing their counterparts no more than a single shot on target in the 90 minutes of play at Stadion Galgenwaard.

The hosts are massive favorites here against Cambuur who have failed to find the net in three of the opening four matches.

They were unlucky to concede the late 90th-minute goal in a narrow 0-1 home defeat to AZ Alkmaar in a match in which Cambuur played the final 30 minutes with ten men on the pitch.

Henk de Jong’s men have conceded 35 goals in 17 away matches in the previous term of Eredivisie and we are worried about their chances of keeping things tight at the back here against the deadliest offense in the country.

The home win to nil looks like a great betting option at the 2.00 odds here knowing that Cambuur have failed to score in three of their four matches at the start of the new Eredivisie campaign.

Another pick you can hardly go wrong with is Ajax to win in -2.5 Asian Handicap at the odds of 1.75.