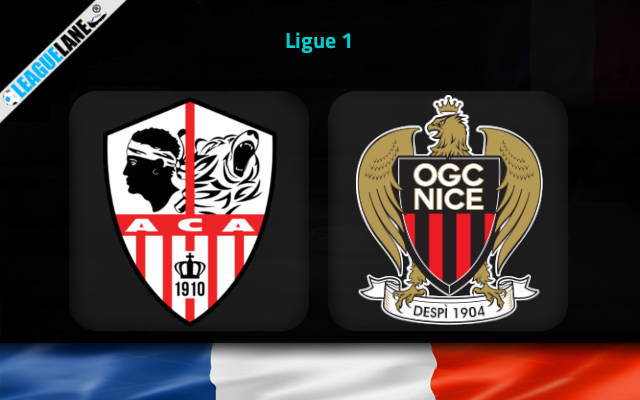 After drawing to FC Koln in Europe, Nice return to domestic duty on Sunday as they travels to Stade Francois Coty to face the hosts Ajaccio.

However, they have not had a flying start this season as expected. Their form is inconsistent and the team posted only one win since the beginning of this campaign.

Meanwhile, Ajaccio are yet to record a victory upon returning to the elite division of French football. They have just a point after playing four fixtures this campaign.

However, it is worth noting that Pantaloni’s men indeed have had a pretty tough schedule to begin with, featuring the clashes with Lille, Rennes, Lens and Lyon in their previous four rounds.

The problem for French manager lies in his team’s defensive line which allowed two or more goals in four of the inaugural six games of the season.

Speaking of the disappointing stats of defensive line doesn’t mean that their offensive is better. The attacking side managed to slot in a total of just 3 goals so far this campaign.

By the looks of things, this match seems to be a great chance for Nice to pick-up a positive momentum they lacks so far.

The away win has to be the way to go here at the odds of 2.40 based on everything we have seen from these two teams so far in the season. In addition, Nice is having a 7-game unbeaten streak against Ajaccio at this venue.

We also expect goals over 2.5 as both the clubs leaked double the number of goals they scored this campaign so far.