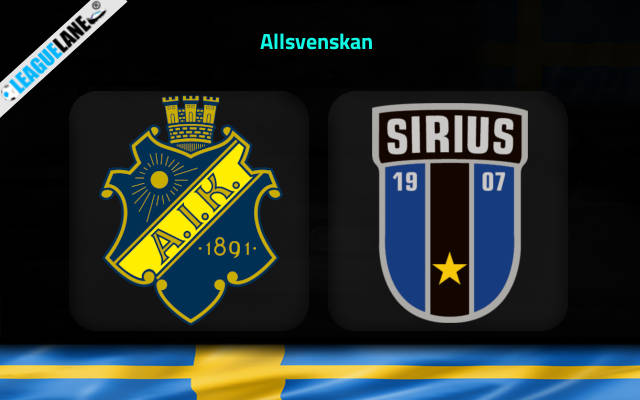 Round 9 of Swedish Allsvenskan takes place when the table toppers AIK Stockholm play host to the mid-table Sirius at Friends Arena this Saturday.

AIK is at top flight in Allsvenskan with 19 points from 9 games. They won 6 times in the league while drew once and lost twice. Their recordings this season are mostly positive and they have the highest of spirits following their recent form in the league. They score goals fairly but tend to concede almost the same amount.

The hosts will play in this game following on from a 3-3 league drawn result against Hammarby. AIK haven’t been able to stop scoring goals, hitting the target in one each one of their last 6 matches. They’ve managed to rack up 10 during that time while conceding a total of 3 from the same.

On the other hand, Sirius resides at the 8th position on the table with 13 points. Of the 8 matches played, they won 4 times in the league while having drawn once and lost on 3 other occasions. They had huge problems to keep things quiet at the back in the beginning of the season but lately they have found some momentum to hold on.

Sirius go into this fixture following on from a 2-0 league win over Elfsborg in the previous week. A tendency of at least one team not managing to score in games featuring them, has become fairly consistent recently. A glance at their last 6 outings shows that it has happened 6 times.

AIK has been clearly enjoying playing at home as they won the last 5 home league matches in a row, all while maintaining a cleansheet. They have also won all of their league h2hs played at home.

Meanwhile, Sirius has never won against this rival in any of the competitions up until this point. They even lost twice from their last 3 away league fixtures.

In addition to their clear h2h dominance, the hosts have won all of their home games this season while conceding none. We therefore envisage a home win to occur this Saturday.