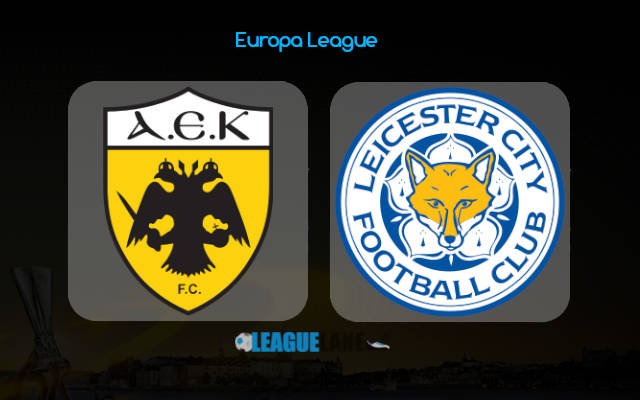 AEK Athens were easily defeated in premiere Europa League group stage match last week in Portugal, so they have no other choice but to aim for victory against Leicester City.

The Foxes have been in great shape lately, even managing to beat Arsenal in London on Sunday. They could make a huge step towards securing UEL playoffs with a potential win in Athens.

Bookmakers have labelled visitors as favorites to snatch all three points at 1.70 odds. That doesn’t come as surprise considering fact that AEK won only one out of last four encounters across competitions.

There were no previous head to head matches between AEK Athens and Leicester City in the past.

AEK Athens have had some brilliant games during the qualifying phase for this competition. It seems like one-leg format was great for them, managing to eliminate Wolfsburg and St Gallen. Situation in Greek Super League has been far from ideal though. Blacks and Yellows from the capital are currently 4th after collecting 10 points from five games. Winless domestic streak was ended on Sunday with a 1-0 win against PAS Giannina. Karim Ansarifard was the only goal scorer.

As for their opponents, Leicester City have had periods with great form and some shocking losses so far. They are struggling with consistency, but still not being far away from the top in Premier League.

The Foxes are 4th with 12 points, which is only one behind table leaders Everton. We are surely going to have one hell of a season in EPL as Leicester being the black horse once again.

After missing a couple of games, Jamie Vardy returned against Arsenal and scored the winning goal. We think he will carry the squad in Athens to another victory.