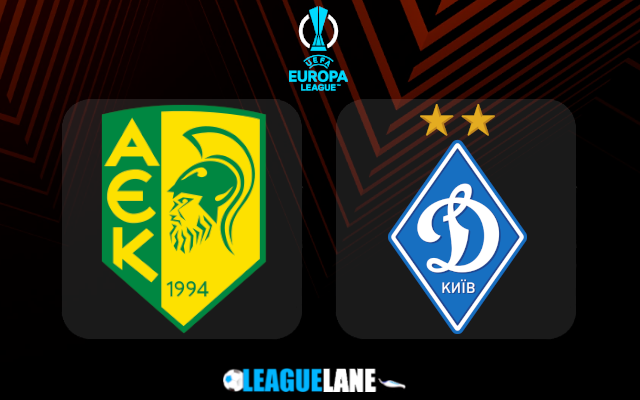 AEK Larnaca will be hosting rivals Dynamo Kyiv in this Europa League game on Thursday at AEK Arena.

The bookmakers see the visitors as favorites for the win here, pricing them at 2.20 odds to claim the spoils here.

It is not very easy to understand why because Dynamo Kyiv have had a dismal start to this Europa League season, losing all the four fixtures.

They will head into the fifth round of Europa League fixtures off the back of four consecutive defeats in the previous outings. Kyiv have scored just twice in the process. It was certainly not the brightest display from Mircea Lucescu at the team’s helm.

The Cyprian side AEK Larnaca started off this Europa League season recording one win and three defeats in their previous four rounds.

In those four games, their offensive side scored 3 goals while the defensive side conceded six. This stats would have counted if they were facing any other outfits in Group B, but this week they are pitted against one of the worst teams in the Europa League this season, Dynamo Kyiv.

Dynamo Kyiv have been struggling badly to adapt to life here at Europa League from the beginning itself. Their offensive side looked toothless in this season too.

Anyways, they will have a chance to post one past this AEK Larnaca side as the home defense has been leaking goals in the league.

Going on, Larnaca do not have any good form to speak of at this stadium at the moment. The fact that they concede defeats here consistently is a negative factor.

But in this game, we don.t want to back them completely with the current home form despite them having more chances to claim the win. Therefore, a Draw No Bet in favor of the home side looks more ideal for this one.