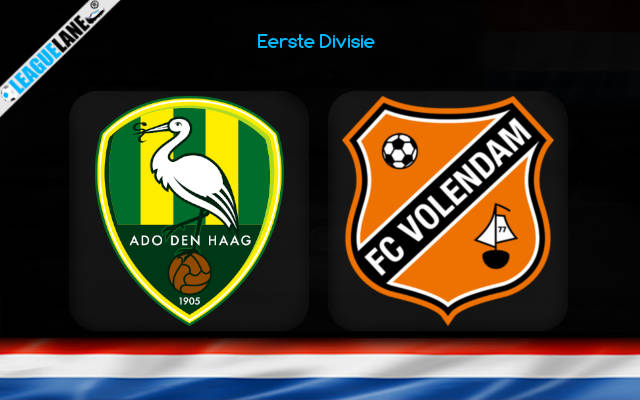 In game week 31 of Eerste Divisie, ADO Den Haag faces Volendam for their next match on Friday at Den Haag.

Den Haag played their last match against Eindhoven. Den Haag scored the first goal in the first half and the goal in the second half of the match for Eindhoven levelled the scoreboard, ending the match with 1-1 FT score.

Volendam played their last match against FC Emmen. Volendam faced a devastating loss in the match, with Emmen having scored four goals in the match while Volendam could score only one. The match ended with 4-1 FT score.

The draw in the last match has added to the team’s winless streak, making it three consecutive matches. Den hag has played well in their matches this season. The team can come back into their form at any time and earn the much-needed win for the team. The team stays 7th on the league table with 49 points from their matches.

Volendam is one of the top contenders of Eerste Divisie this season. They have stayed in the upper half of the league table throughout the season. The team currently has had a hiccup in their recent matches, getting a cold streak of three matches. However, they still stay second on the league table with 63 points to their name.

Both teams seem to be in a bit of trouble with their form in the recent matches. The teams have not won in their last three matches. Both teams will look to earn a win in this match to break their cold streak.

Looking at the records, the match is most likely to end in a win for Volendam. Volendam and Den Haag have scored over 1.5 goals in most of their matches and with both teams likely to score in the match, the game will end with over 2.5 goals.