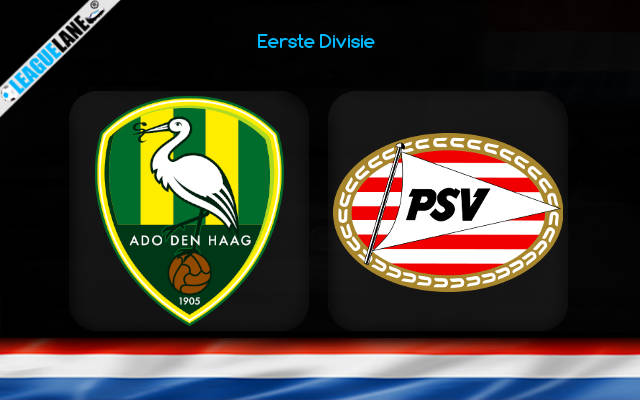 Two mid-table sides namely ADO Den Haag and Jong PSV will clash against each other at the Cars Jeans Stadion for Matchday 9 in the Eerste Divisie. Both teams share the same number of points on the table ranking.

This season the host have lost half of their fixtures. However, they managed to upset league leaders PEC Zwolle in their most recent game. It was Bart Hintum’s own goal which helped Giovanni Franken’s side to win that game.

As a result the team currently occupies the thirteenth position on the table. They began this month by suffering a narrow defeat against Willem II. However, they are now unbeaten since that result.

Meanwhile, the visitors are just one place ahead of their counterparts. Most recently, they managed to win a point against VVV. It was Simon Colyn who scored the equaliser in the 85th minute.

It is worth knowing that in that game Adil Ramzi’s team registered six shots on target.

This month both these clubs share the same statistics. They both lost their first game of the month, and now they are unbeaten since then.
Moreover, the host have won two of their last five league outing. Do also note that they won three points against league leaders PEC Zwolle.
The visitors are conceding goals at the rate of 1.75 goals per game this season. This is one of the reasons why they have a negative goal difference this early season.

Our prediction is that Den Haag will win by a 1-0 margin – at 10.00 odd. This is after considering that the host are unbeaten in the last two matches against Jong PSV. Also, they won this fixture last year by a 1-0 margin.

Our second tip for this game is that Den Haag will keep a clean sheet – the odd for this tip will be 3.25 odd. Last year, the current home team kept a clean sheet against this side.