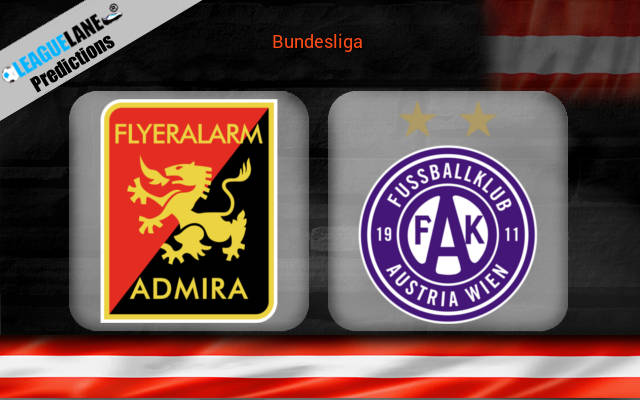 Regular season for Austrian Bundesliga ends with game week 22 and it brings us the match between Admira and Austria Vienna on Sunday at Maria Enzersdorf.

Admira played against Rheindorf Altach in their last match, in which Admira scored two goals while Altach could score none. The match ended in a win for Admira with 0-2 FT score.

Austria Vienna has added yet another win to their tally after the last match against Wolfsberger FC. Wolfsberger AC ended the match goalless while Vienna scored the one and only goal in the match.

Admira’s win in the last match helped the team to score a much-needed win and end a long unbeaten streak. The team had been winless in their last ten matches. The team currently stays 11th on the league table with only 20 points from their matches. With only one more match in line, the team will have to fight their chance to stay in Bundesliga in the relegation play-offs.

Austria Vienna needs a win in their next match to ensure the team stays in the promotion zone. The team is only two points away from bottom teams and a win for either of them can put Vienna in the relegation zone. Vienna will hope to secure a win to ensure their position in the play-offs zone.

Admira’s ten-game winless streak shows the team’s poor performance in this season. With the regular season coming to an end with this match, they have no chance to avoid the relegation zone. Austria Vienna has played fairly well in their recent matches and has won in last three consecutive matches. However, they still need this win if they want to ensure their position in the promotion zone.

Admira’s home matches have not been as productive as they hoped it would. They have lost in the last five matches, failing to score in three of them as well. Austria Vienna is unbeaten in their home matches and will look to keep this streak running.

Both teams have scored in their recent matches and can be expected to score in this match as well, also making it probable for the match to end with over 2.5 goals. However, the match is most likely to end in a win for Vienna as they are the better team of the two.