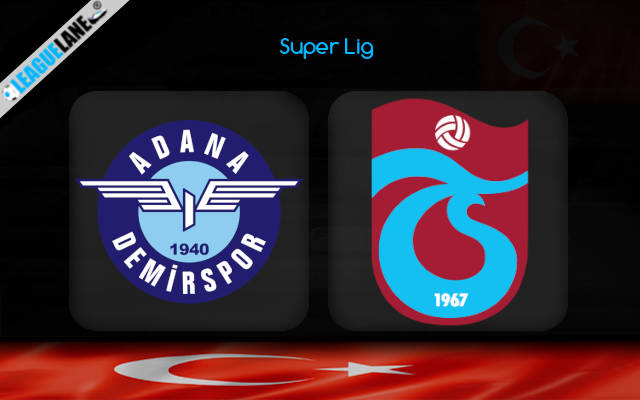 Trabzonspor will be hoping to bounce back from a 3-2 loss at Ferencvaros on Monday evening when they travel to Yeni Adana Stadyumu to take on Adana Demirspor in the sixth round of Super Lig.

The reigning champions share the third place in the league standings with five other teams, including their Monday counterparts Adana Demirspor.

The two outfits sit at the record of three wins, one draw, and one defeat in the opening five games of the season.

Trabzon’s head coach Abdullah Avci has problems with the lack of defensive meticulousness in his team’s back line at the beginning of the season, especially on travels.

Trabzonbspor have conceded at least two goals in three of the last four away outings in all competitions, including five at Antalyaspor and three at Ferencvaros on Thursday.

Adana Demirspor, on the other side, have a perfect home record with two wins in two league games in their own backyard.

Vincenzo Montella’s troops did not allow a single goal in the opening two home outings in the league against Sivasspor and Umraniyespor.

Interestingly, it’s Adana Demirspor who come into this as the bookies’ favorites although they are about to face the defending champions on Monday. We certainly must not underestimate the champs here, especially knowing they have a star-studded lineup including the likes of Enis Bardhi, Andreas Cornelius, Mahmoud Trezeguet, etc.

Do not get us wrong, Adana Demirspor have a very strong lineup themselves, they are playing very well at the start of the season. However, we just have to see the value in backing the visitors to avoid a defeat at the odds of 1.57. Another decent betting pick would be Both Teams To Score at the 1.66 odds.