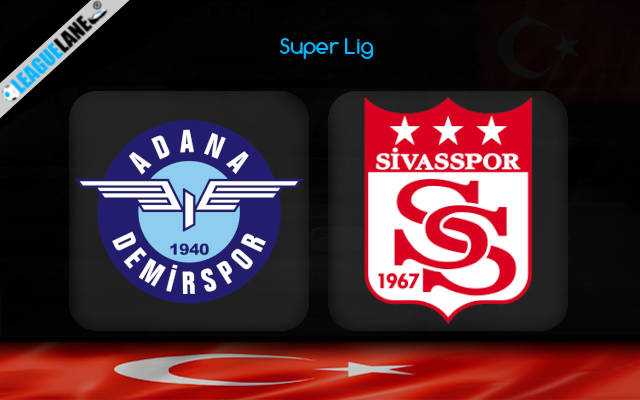 In game week 29 of Super Lig, Adana Demirspor faces Sivasspor for their next match on Sunday at Adana.

Sivasspor played against Antalyaspor in their last match, in which Antalyaspor scored the only goal in the match while Sivasspor could score none. The match ended with 1-0 FT score.

Adana Demirspor’s loss in the last match ended their 5-game unbeaten streak. The team has played fairly well in their matches, having lost in their matches only occasionally. They sit 6th on the league table with 45 points from their matches so far.

Sivasspor couldn’t keep a constant streak in most of their matches. They are inconsistent with their form in the matches. They have 8 wins, 10 draws and 10 losses from their matches so far. The team no sits 14th on the league table and has earned 34 points so far.

Sivasspor has been inconsistent with their form in their matches throughout the season. The inconsistency will affect their standing when they face against a team such as Adana Demirspor who are in the upper half of the league table. Adana Demirspor will look to make up for their loss with a win in this match.

Adana Demirspor also has the advantage of playing in their home ground. They are unbeaten in their last eight matches and have lost in only two of their home matches in Super Lig. Sivasspor, on the other hand, has not produced the result the team had hoped for in their away matches. They have lost consecutively in their last four road trips and have failed to score in the last two as well.

Looking at the records, I believe the match will end in a win for Adana Demirspor. The match is also likely to end with over 2.5 goals, and both teams will contribute to the scoreboard.