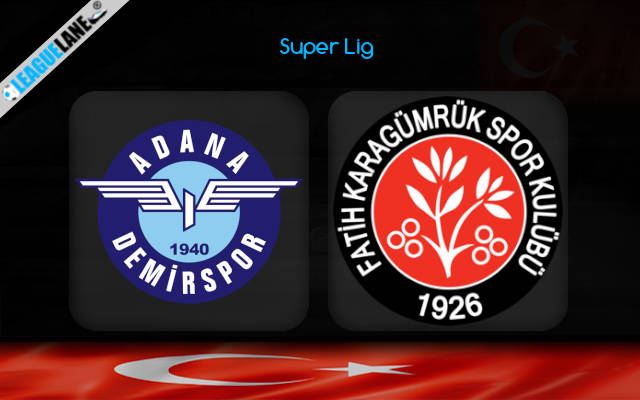 Adana Demirspor vs Fatih Karagumruk Predictions and Free Tips from our expert tipsters when the teams go head-to-head in Super Lig on Sunday, 25 December 2022.

Adana have been very busy during December. They played well in all of their five friendly games. Now they will focus on the remaining matches in Super Lig. Last time in the league, they held Alanyaspor in a 1-1 draw back in November.

Fatih played against their league rivals for their friendly fixtures. They played in an exciting 3-3 draw against Gaziantep last month in the league.

This is going to be the second time this year that both these teams will go head-to-head. Last time, the host won by a huge 5-0 margin. Moreover, they are unbeaten against this team at their home ground since 2019.

Who will win the match between Adana Demirspor and Fatih Karagumruk?

The host are favourites to win this fixture. They have already won once this year against this team. It is important to note that the visitors have lost two of their last three away games earlier in the league. Moreover, they did not play against teams from other leagues for their friendly games.

This fixture rarely lacks goals. Since 2021 both teams have played against each other on two occasions. On both occasions, the game ended with over 2.5 goals being scored. We can expect the same trend to continue this time as well.

We can expect both teams to find the back of the net. This is after considering that in two of the last three head-to-head meetings at this ground, both teams have scored.

The first tip is that Adana Demirspor will win both halves– at 2.62 odd. They are third in the league and are unbeaten in the last five outings. Not to mention that they won both halves of this fixture back in January.

Our second tip is that Over 2.5 goals will be scored – the odd for this tip will be at 1.61. In the last two head-to-head meetings at least three goals have been scored.