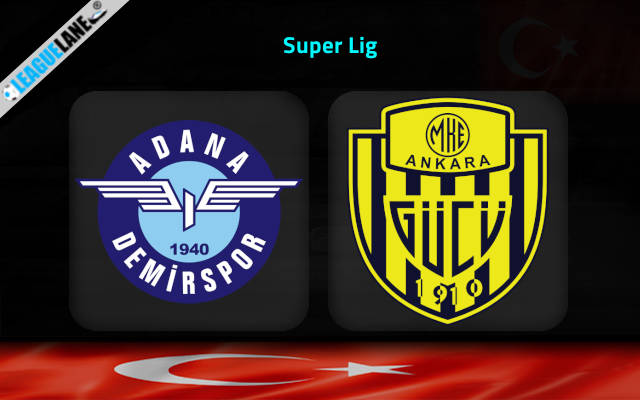 Adana Demirspor vs Ankaragucu Predictions and Free Tips from our expert tipsters when the teams go head-to-head in Super Lig on Saturday, 14 January 2023.

Adana are fourth in the league and recently celebrated a huge 6-0 win over Istanbulspor. They have a solid winning record at home as they are unbeaten since December.

Ankaragucu got their fifth win of the season as they defeated Kayserispor by 2-1 last time. They are just a few points above the relegation zone and have a busy month ahead of them. They have a crucial game against Besiktas in the Turkish Cup after this match.

In the last ten years, the host have dominated this fixture. They have won four of the last five head-to-head matches against this team.

Another interesting fact is that the last time Ankaragucu won this fixture at this ground was way back in 2003. Both teams will be meeting at Yeni Adana Stadyumu after a period of five years.

Who will win the match between Adana Demirspor and Ankaragucu?

The past records show that the host have won this fixture on numerous occasions. Also, they are unbeaten in three of their last five outings. Therefore, we can expect Adana Demirspor to take all three points from this game.

This fixture is a high-scoring one in recent times. In three of the last four meetings between these two teams ended with a minimum of three goals combined.

Both teams have scored consistently in the last two meetings at Yeni Adana Stadyumu, with just one exception which nearly twenty years ago. We can back the same trend this time as well.

The host are unbeaten in the last four encounters against this team. Moreover, Ankaragucu have lost two of their last three outings. Therefore, our first tip is that Adana Demirspor will win this game – the odd for this tip will be at 1.75 odd.

Also, you can bet on both teams to score – at 1.66. The main reason for this tip is that both teams have scored a combined total of fifteen goals in their last four matches starting in 2012.