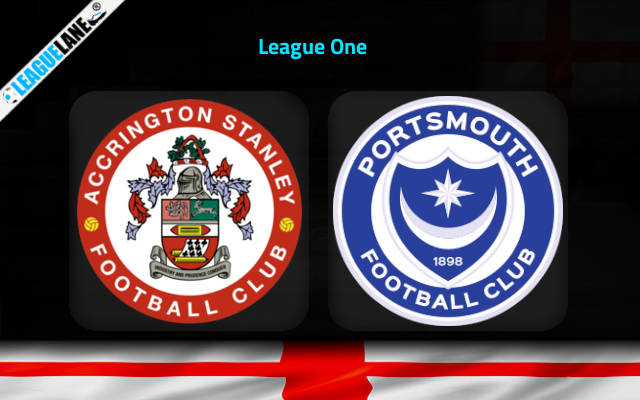 Accrington vs Portsmouth Predictions and Free Tips from our expert tipsters when the teams go head-to-head in League One on Saturday, 10 December 2022.

More than 40% of the matches have ended in a stalemate for Portsmouth till now. They are currently on a five-game winless run. It is worth knowing that they have an advantage as they have played two games less than their current counterparts.

Meanwhile, Accrington are making a slow recovery as they are unbeaten in their last two outings. If they manage to secure a win in this upcoming fixture they will jump to the fifteenth position on the table.

Accrington are unbeaten since 2016 at their home ground against this team. Both teams last met in March this year and the visitors won that game by 4-0.

The last two meetings at Accrington’s home ground have ended in a stalemate. Do note that this will be the second time both these teams will be meeting each other this year. Portsmouth are winless in their last two away games in the League One.

Who will win the match between Accrington and Portsmouth?

The host will most likely take all three points from this fixture. They have an excellent unbeaten record at their home ground. Also, they are unbeaten in their last two games. At the same time, the visitors are winless since late October.

We can expect both teams to score over 2.5 goals. This fixture rarely lacks goals. In the last two meetings alone both teams have scored a combined total of eight goals.

Both teams have scored consistently since 2018 at this ground. We can expect the same this time as well.

The first tip is that Accrington will win this game– at 3.30 odd. They are unbeaten in their last five matches at home ground. Do note that the visitors have a poor away record in the last two months.

Our second tip is that Over 2.5 goals with Both teams to score – at 2.20. We can back this tip as both teams have scored a combined total of fifteen goals in their last three meetings at The Wham Stadium.