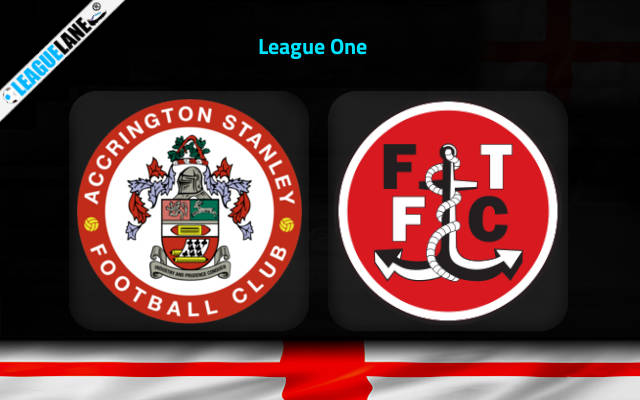 Neither Accrington Stanley nor Fleetwood Town have been quite capable of keeping things quiet defensively throughout the season. Since the hosts have just managed a victory while the visitors instantly showed a better performance under the new manager, we expect to see them both on the scoreline on Saturday at Wham Stadium.

Accrington Stanley host Fleetwood Town in the 12th round of the League One on Saturday afternoon at Wham Stadium.

The match was postponed earlier in the season and is due to be played as one of just two league games on the FA Cup weekend.

Both teams have been struggling badly to find the right rhythm since the beginning of the season, but Accrington Stanley should come into this tie in somewhat higher spirits.

The hosts ended a three-loss streak with an important 0-1 victory away at Lincoln City seven days ago.

They moved up to 14th position in the league standings as a consequence. It will be very interesting to see whether John Coleman’s men will be able to back up this win and make it two league victories on the spin here when Fleetwood Town come to visit Wham Stadium.

The visitors also managed to snap their three-defeat streak last time out as they held bottom-half rivals AFC Wimbledon to a 2-2 draw on the road.

It was the debut of Stephen Crainey as the new caretaker manager since Fleetwood Town had earlier parted ways with Simon Grayson following a desperate run of results in this term of the League One.