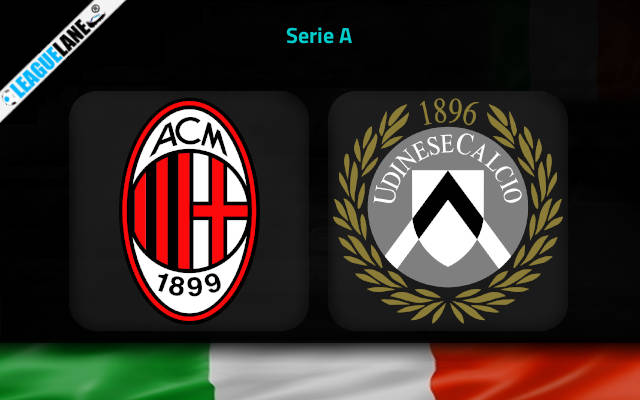 AC Milan and Udinese will raise the curtain on the 2022/23 Serie A season on Saturday afternoon when they take on each other at Stadio Giuseppe Meazza.

AC Milan have finally managed to win their maiden Scudetto title in more than ten years last season when they took advantage of slumps of most of their rivals in the top half of the standings.

Interestingly, Stefano Pioli’s team were not very active in the summer transfer window after the title.

They lost important defensive players Franck Kessie and Alessio Romagnoli in between the two seasons, but the likes of Pierre Kalulu and Tomasso Pobegba certainly have the quality to fill in their shoes this time around.

It is worth noting that I Rossoneri now look much stronger in the final third after the arrivals of Charles de Ketelaere, Yacine Adli, and Divock Origi.

They seemed fantastic in the pre-season friendlies, recording three impressive wins in the previous three tests.

AC Milan bagged 13 goals in the wins over Wolfsberger (Austrian Bundesliga side), Marseille (0-2), and L.R. Vicenza (a 1-6 win in the final pre-season check).

We expect a strong performance from the champions at the start of the new season against Udinese who have been far less impressive in their pre-season schedule.

Udinese barely went past lower-division FeralpiSalo at the start of their Coppa Italia campaign last weekend, beating the rivals 2-1 while registering only three shots on target (seven in total) in the 90 minutes of play.

We have plenty of reasons to back the hosts here. You can go with AC Milan to have the lead at the half time and win the match at the end at the odds of 2.10. Also, Ante Rebic is well worth backing to score anytime after netting two goals in the last weekend’s final pre-season test against Vicenza.