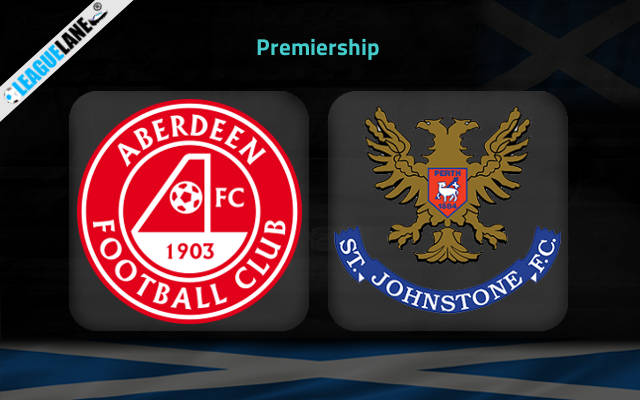 Aberdeen vs St. Johnstone Predictions and Free Tips from our expert tipsters when the teams go head-to-head in Premiership on Saturday, 07 January 2023.

Aberdeen faced Ross County for their first game of the year and they managed to hold them in a goalless draw. This result helped them end their four-game losing streak. Now they will face St. Johnstone.

Tony Watt’s goal was enough for Dundee to take all three points from St. Johnstone last time. They will focus on winning maximum points from their January fixtures as they are on a three-game losing streak.

The host are unbeaten in three of the last four head-to-head meetings. Back in August of last year, Aberdeen managed to win this fixture by 1-0.

The last time the visitors won at this ground was back in 2021.

Who will win the match between Aberdeen and St. Johnstone?

The host have struggled to win this fixture at this ground. Both teams are going through a bad form in the league this season. It is important to mention that Aberdeen are yet to win a game since November. Another interesting fact is that both teams have lost ten matches till now.

This fixture is a low-scoring one in recent times. The last seven meetings between these two teams ended with fewer than three goals being scored combined.

Both teams have not scored consistently in this fixture since 2020, with only two exceptions. At Pittodrie Stadium a similar trend is observed. We can back the same trend this time as well.

The most recent encounter at Pittodrie Stadium ended in a stalemate. Also, both teams are struggling to win their league games. You can back the following, as our first tip is that the game will end in a draw– the odd for this tip will be at 3.50 odd.

Our second tip is that Under 2.5 goals will be scored – at 1.72. The last four head-to-head matches ended with fewer than two goals. Not to mention that both teams are yet to score a goal this year.